In case you’re still following this blog, you should know that I’ve decided to make a change.

From now on I’ll only be blogging at The Thrifting Vignettist.

I’ll still be blogging about knitting and crafting, but I figured now would be a good time to simplify a bit. So head over there!

All of those pretty squares I blocked? The squares that took all afternoon and all night to dry? There were nineteen of them. Nineteen pretty little squares were stretched and dried while one stray sat on the counter inside, unnoticed and forgotten. I doubt I’ll be able to sew together all of those squares before the last one dries. But still. Really annoying.

Pretty enough to be puked on?

I found this pattern via dlittlegarden, and I love it. Twenty blocks is just enough. Enough to make a substantial pile of wool, but not so many that the pattern bores itself into the most sacred parts of your mind and makes you want to run off of a cliff while screaming, “DC, ch 1 eight times! Join! Chain 6! …”

I don’t know if other people feel that way after making so many of the same block. Maybe I shouldn’t broadcast that.

The yarn is recycled from an Old Navy sweater, and is worsted. Ish. The pattern calls for 2 strands of DK, making a 5.5″ square. I blocked my squares to 7″. Which is fine, because this is a blanket and gauge doesn’t really matter in a blanket. No really. I promise. It drives me batty when people get so uptight about gauge.

To make the blocks, I used about 550 yards. On a size H hook. No modifications. I think that about covers the boring logistics.

This was my first time translating a crochet pattern from British English to American English. It’s actually really really easy. GarnStudios has a nice chart for it here.

Oh. If you’re a non-knitter who reads this, I should mention that in the picture the blanket is unfinished. All of those squares still need to be sewn together, and then I’ll put a border on it. Right now the squares are blocking, which makes the yarn conform to the size and shape I desire.

Speaking of crocheting squares out of recycled yarn, I miss laughingpurplegoldfish. So much. She hasn’t posted anything in one month and four days. I’m sure I’ve sung her praises here before, but she’s just such a magnificent crafter. I’m always tempted to comment on her last post about how much I miss seeing her work, but … I don’t know. I don’t want to be creepy. And I never really comment on her site – maybe 3 times total. But laughingpurple, if you’re out there, know that you are missed. And then post something, already.

Eh, not much to say about this one. Ecru cotton, simple blanket. I ditched the bobbles in the pattern after three pattern repeats, because I suck at bobbles. You can kind of see one failed bobble in the bottom-center-area of the picture.

I hated the bobbles so much, that I actually e-mailed Alice of Futuregirl to ask her if she knew of any good bobble tutorials or had any tips. She actually replied! She’s really nice, and one of the best crocheters in the business. Her tutorials are insane. Good insane. Great insane.

My crocheted-baby-blanket mojo hasn’t quite run out yet, and I think I’m going to do this one next. Out of a recycled blend. It’ll be my first time translating a British pattern, let’s hope it works.

I’m not a great cook, so I’d like to be able to prepare these with as few other ingredients as possible. How about we limit it to brown rice, fresh vegetables, milk, tortillas, spices, and/or … I don’t know, yogurt? Basically whatever I have in my fridge. No butter, no olive oil, no cheese, no pasta, no meat (obviously).

This pattern is cool. I wanted to fill the frogs with rice so they could be both a toy and baby-warmer. Because lately I’ve been paranoid and can’t even imagine how any small child can survive a Utah winter. All the babies are going to die of frostbite unless I can keep them warm with rice bags.

Anyway, I forgot that last week our last box of rice was infested with wee little bugs, so all I had were some really old lentil-like things in a mason jar, or unpopped popcorn. I went with the ambiguous beans. Anyway, next time I make this pattern I’d like to make the frogs a bit more hefty, because right now they seem kind of malnourished. And I’d use rice. And I wouldn’t use beads for the eyes, because they will most likely be torn off the frogs’ heads and swallowed. And then all the babies will die of frostbite and suffocation.

Also, the green frog was made from an old vintage blouse that I’ve had for years but maybe worn twice. After chopping up the back of the blouse, I noticed that it was by Judy Bond. And I can’t remember if that’s a vintage brand that I’m supposed to worship or not. So I’m confused and guilty. The red frog is just made from thrifted scrap fabric.

I love to crochet edgings. So much work, so little payoff. And how many receiving blankets do babies need? ONE MILLION.

You never think it will happen to you. 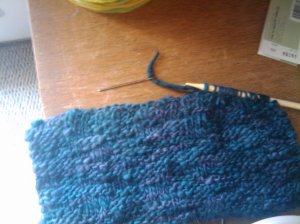 Dammit. Daaammmmmiiiiit. Fifteen stitches left to weave, two inches of yarn, and no intention of ripping back a row. Dammit.

The lyrics are tricky.

Starting work on my dad’s 60th birthday present. Which of these do you like best? Let’s pretend they’re numbered, top to bottom from 1 to 4. Will eventually be a framed piece of embroidery or cross stitch or possibly stranded knitting.

I need to take a nap.

So there I was, scrolling merrily through my feed reader, when I came upon this post. Which is perfectly understandable and unsurprising. It’s nothing outside of Lee Meredith’s usual genius on her blog, Do Stuff. However, I’ve kind of lost my mind the last few days. If it doesn’t have to do with labor or childbirth, I can’t really grasp any concept. Can’t even make tea. It’s annoying.

I thought I was looking at a post by Heather Armstrong of Dooce. Dooce and Do Stuff are very close together when listed alphabetically, so it’s an easy enough mistake to make. It got into my head that this extremely popular Utahan writer was now a knitter. I love Dooce to begin with, but oh-my-god-if-heather-armstrong-became-a-knitter-i-might-just-die. Especially a yarn-recycling knitter. There’s just no way that I could love a stranger that much. A Utahan writer who makes fun of Mormon society and just went through a natural childbirth and has dogs and fancy camera skills and knits? And did I mention that she earns a living writing? I’d have to give up on every dream and aspiration I’ve ever had, because it would have already been accomplished.

stances and stitches
Create a free website or blog at WordPress.com.